A successful partnership between Generation UK Edinburgh and City Access Scaffolding led to an innovative rolling, rather than fixed platform, to complete a school atrium in the City Centre. The solution provided safe access and working platform for roof contractors without compromise for the other trades on site.   The solution not only improved site efficiency it reduced erection time and scaffold required by 86% and 90% respectively over the other solutions proposed.

City Access Scaffolding were commissioned to erect a safe system of work for skylight and roof installation teams, for a new build school atrium area in Edinburgh City Centre. The system required needed to support numerous personnel and trades operating onsite with their own set of access and equipment requirements.

The initial plan was to build a freestanding system scaffold, using Genlok, from the ground up, over a footprint of 25m in length, 15m in width and a height of 20m.  The proposed structure required a team of six operatives working from the ground up, supported by materials being dropped into the working area by the tower crane. 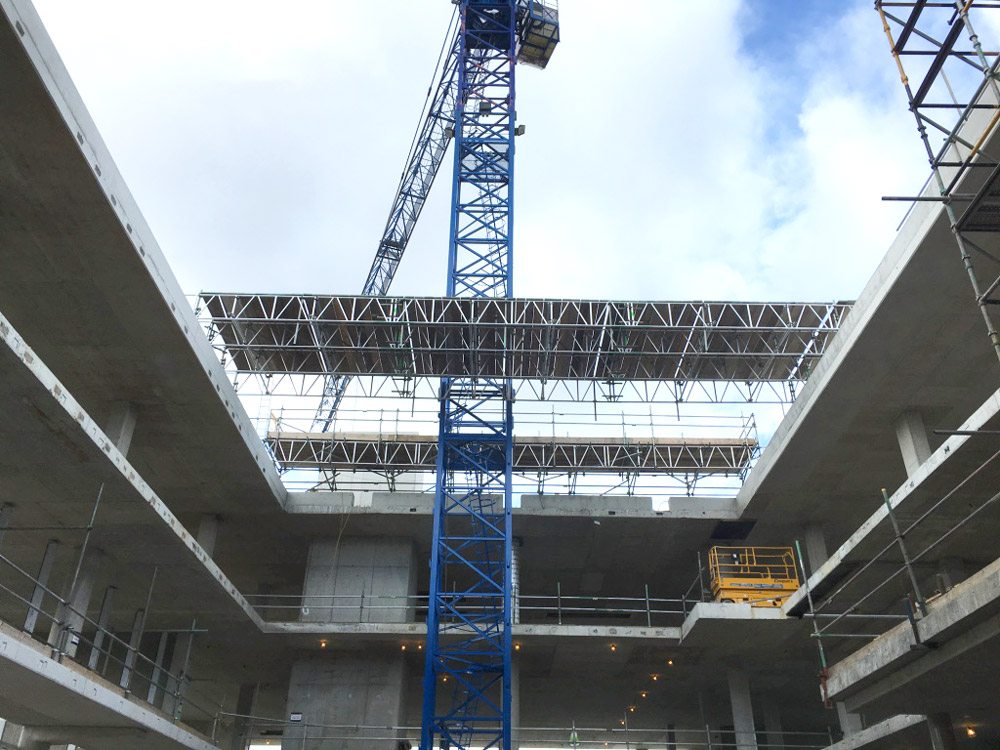 The design meant the scaffold covered all the loading bays to the other floors, which limited the use of site based tower cranes to supply the other trades. To support this approach required scaffolding teams onsite with an intensive build and dismantle programme to ensure supply and access for the other trades working across the site.

With the size of footprint the design required around 100 tonnes of materials and the entire installation programme was estimated at 4 weeks.

Mark Skinner, Director of City Access and Craig Watson, Branch Manager of Generation Edinburgh had a site meeting to discuss design and scaffold solutions. At this point Craig Watson suggested the possibility of a temporary rolling structure as opposed to a fixed platform using Generation’s Uni Roof Runway Track System.

The concept was to build two independent scaffolds at two elevations, each scaffold to be fitted with our Uni Roof Runway Track System so mobile castor wheels could be connected to enable us to move the scaffold depending on the day to day site requirements.  The initial concept was to erect two separate mobile structures on this scaffold allowing for multiple trade use.

The initial concept was drawn up and agreed between Craig Watson and Mark Skinner and issued to Generation Design Engineers for clarity and suitability of concept. They were then provided to Zenith design to issue construction drawings for the main contractor to accept.

By utilising this safe system of work, City Access Scaffolding reduced the erection time by 86%, from four weeks to three days, and equipment required by 90% from 100 tonnes to 10 tonnes of materials.

This does not account for time savings onsite where the design ensured that trades working below could still take advantage of the tower crane whilst allowing the roofing contractors safe access and a working platform.