On the 8th April 2016, Generation UK were happy to treat our best partners to the Sale Sharks vs. Montpellier quarter final of the European rugby challenge cup game.

Sale Sharks had turned the AJ Bell stadium into a fortress, having an unbeaten home record so far this season. Montpellier arrived in the North West, boasting a six match undefeated run and positioned second in the French top 14. 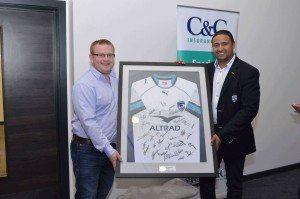 Before the long awaited kick-off, guests were able to mingle with previous Montpellier players and coaching staff and enjoy a meal in the hospitality     suite overlooking the ground.

During the evening, our partners had their photographs taken with Montpellier legends and took home a signed Montpellier rugby ball each. Generation also ran a ‘Guess the points’ competition where Niall O’Donaoghue from O’Connor Utilities won a signed and framed Montpellier Rugby   shirt.

After a tough game, Montpellier knocked Sharks out of the European Challenge Cup with a 19-25 win.